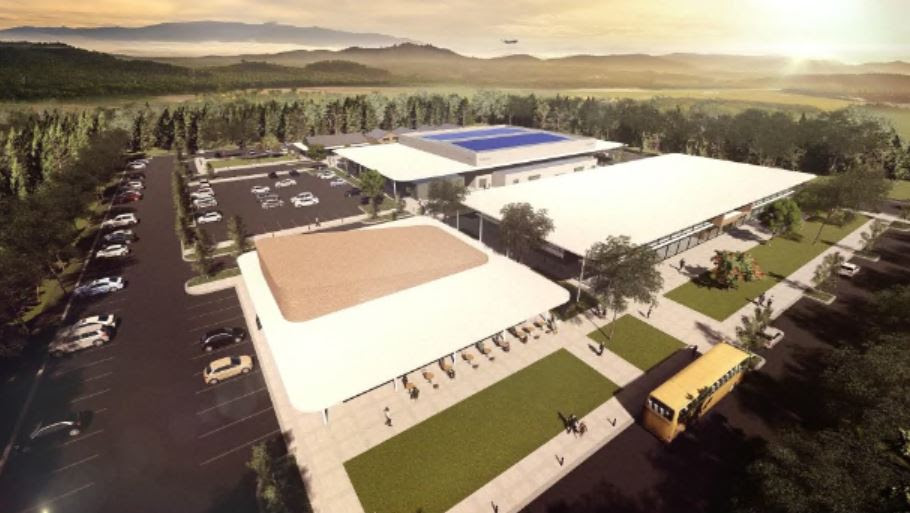 An artist's impression of the planned HQ for Byron Studios in Ballina.

BYRON Shire filmmakers Will Gammon and Mark Holden have a dream ‒ to have a new 3.5ha film complex in a future Southern Cross Expansion and Innovation Precinct in Ballina by 2023. The company currently has offices at the Byron Bay Industrial Estate, and recently started leasing the Alstonville Cultural Centre from Ballina Shire Council.

Charlotte Brigel, Sales and Marketing for Byron Studios, said the idea had always been to offer jobs for local professionals and to give young residents a start in the industry. "The idea is to create 1000-plus jobs within the next five years, because the opportunities are out there and we have the skills and the talent here," she said. "Due to COVID and with all the major studios fully booked in Sydney, Adelaide, Gold Coast and others, we have seen real demand on the Northern Rivers from the film industry. "Hence, we decided to bring this forward and have some interim studios in Byron Bay and Alstonville ahead of what we are planning to have in Ballina. "The idea in Ballina is to build a film complex in various stages, that will be the home not only for film and TV industry, but also a home for the arts, events, for community... it could include many different elements and offer jobs in the region, a hub for professionals to work locally so we don't have to travel away from home to work."

Mrs Brigel said the current studios in Byron and Alstonville can cater for small film needs to major productions. "It can be anything from half a day of filming to six to eight-month projects," she said. "We do films, series, music videos, we also do film shoots with our green screen in Byron, we can have production offices, operating from here, from children's programs to big projects, we are attracting a variety of clients to this part of the world." The executive said the company currently offered freelance jobs to cameramen, caterers, designers, photographers, post production and long term roles working on their operations. "Could be anything from actors, to carpenters, to caterers, electricians, set designers, painters, builders, and we are talking to several local people in that respect," she said. "We are currently advertising a role as operations manager, and that role will expand to production managers, bookings, marketing and more in the future, and all those roles will be offered to Northern NSW residents first."